In this chaotic, advertorial, multibranded world of ours, it can be difficult to know precisely how much value one is actually getting for one's money. The best solution to this problem is to carefully research your purchases beforehand, but this can take time and effort, and it's not half as much fun or easy as just buying whatever seems the neatest.

The other alternative is to rely on idiotic folk wisdom like "you get what you pay for". But of course, whenever any reasonably wealthy person follows "you get what you pay for" to its logical conclusion they end up buying German cars, $7 bags of "organic" corn chips, and eight thousand dollar sets of Bose speakers simply because these were the most expensive options available to them at the time. 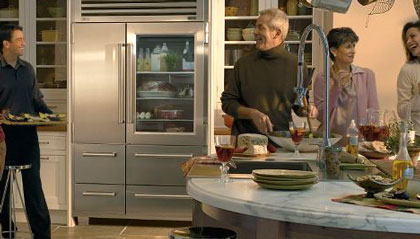 Many people foolishly assume that the sole purpose of a refrigerator is to store food in a cool environment to slow the process of spoilage. This is incorrect. Your fridge--like every other appliance you own--is also a social statement. It tells the world who you are. And in the case of people who purchase this particular refrigerator, "who they are" is apparently "someone who finds it perfectly acceptable to pay more than ten thousand dollars for what is essentially just a large electric cooler."

I mean, just look how happy all those old white people are up there! Do you think they'd be half as elated with an $800 Whirlpool behind them? Fuck no! I mean, shit, this thing has a GLASS DOOR. Do you have any idea how expensive glass is? And that isn't a rhetorical question, I legitimately do not know how expensive glass is. In fact, the realization of how hopelessly inept I am when it comes to estimating the cost of glass is really tearing me up inside. Seriously guys: I'm not sure I can take much more of this; my mind is going to snap. Come on! Please! I'm begging you! For the love of god: EMAIL ME IMMEDIATELY IF YOU HAVE ANY IDEA HOW EXPENSIVE GLASS IS THIS IS NOT A JOKE I AM GOING TO GO GET MY SACK OF KNIVES.

I don't want to get too hung up on the glass though, cause this baby has more than its share of amazing features. Here are just a few:

We've all heard all the horror stories about refrigerator door hinge failure. I don't know about you, but I'm getting pretty tired of large, heavy doors snapping off and crushing the brittle skulls of groups of elderly wheelchair-bound relatives whose only crime was crowding around to the refrigerator in anticipation of the ice-cold lemon drinks I had promised to retrieve for them.

Overall, I would probably rate hinges as a must-have feature when it comes to an appliance such as a fridge.

Stainless steel appliances are often more trouble than they're worth. Sure, they look pretty at the store, but two weeks later they're dented, smudged, scratched, and covered in your secretary's blood. Not worth the extra 25% if you ask me.

Poor people often like the make the argument that "most people don't need microprocessors and touch panel controls on their refrigerators and the designers of these appliances are obviously just including them them in an attempt to justify the exorbitant prices they're charging", but I don't buy that.

Certainly these features are of little use to the average consumer, but Fridgeophiles like myself would be hard-pressed to live without them.

For example: I prefer that my freezer be significantly colder during the morning hours. There's absolutely no reason for it, I just like it that way. Without a programmable exterior thermostat, maintaining this temperature cycle would be extraordinarily inconvenient to say the least. Certainly it would be possible, but I'll not be reduced to opening the doors and twisting large numbered dials like some sort of savage, thank you very much.

Furthermore, without a microprocessor, the appliance would have no way of adjusting the temperature to counteract these unnecessary swings in temperature, reducing several thousand dollars worth of Cappanari’s Luxury Iced-Milk to an unpalatable gourmet sludge in mere hours.

ABSURDITY RATING
10/10
Because what else are you gonna spend all that money on?
An anonymous donation to a deserving charity? Please. 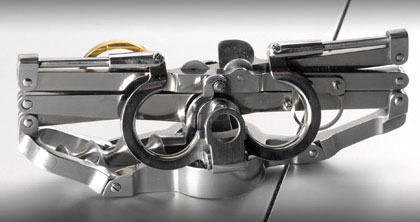 Sure, maybe a corkscrew isn't technically considered an appliance, but I really couldn't resist including it. Here is a short list of actual facts about these corkscrews: 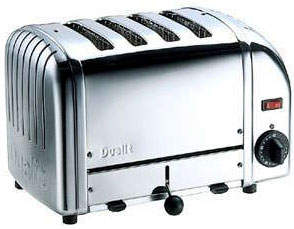 I'll give Dualit credit for one thing: Next to a $70,000 corkscrew, their silly little three hundred-dollar toaster seems positively sensible. And yet, I still find myself scoffing at it. This might be due to my deep-seated hatred of luxury toasters (my father's lucrative career as an Airline Pilot Salesman ended when a $150 KitchenAid falsely accused him of sexual misconduct), or it could just be that I think buying a three hundred-dollar toaster is sort of dumb.

Either way, here's what you get for your money:

You know, a High Lift Mechanism! To help you "remove small items easily"? Like if you were to toast a crust of bread, a piece of bread you've already eaten half of, or a handful of croutons; the High Lift Mechanism would help you get them out without reaching in and scorching your fingers. Useful.

So what's #1 on my wishlist when purchasing a new toaster? That's right: It must be available in a variety of cleverly-named retina-scorching colors. If I can't get it in "Asphyxiated-Infant Blue" or "Sinustitis-Pus White", no sale.

I feel it bears mentioning that for this price, one could purchase and burn out 10 or more "regular" four slot toasters in the span of two years. But then again they likely wouldn't have the convenient Removable Crumb Tray that this toaster features! What's that you say? A Removable crumb tray is pretty much standard on even the cheapest of toasters and has been for many years now? I stand corrected.

ABSURDITY RATING
6/10
Like I said, this is just a really expensive toaster.
It's not offensive or anything, just sort of pointless. 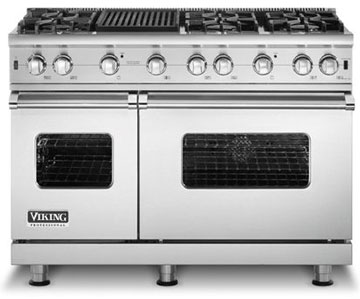 If there's one thing rich assholes love, it's a Viking range. Obviously this is not to say that everyone who buys a Viking range is a rich asshole, but its a well known fact that all rich assholes buy Viking ranges. For those of you who are unfamiliar with Viking's product line, allow me to bring you up to speed: Viking makes stoves that are expensive as shit. I've no doubt that there are thousands of people out there who will patronizingly explain to you why a Viking range is "well worth the investment", but since most of these are people deluded enough to feel it's acceptable to spend nearly $10,000 on a thing that heats food, their opinions would be valuable only to someone performing a study on the mental gymnastics the wealthy engage in to avoid feeling guilty about pissing their money all over the pockmarked, syphilitic, faces of eager Viking executives.

So let's take a look at these features and be done with it.

People who're unfamiliar with cooking (along with the braindead philistines who settle for electric cooktops) might assume that this much cooking power is unnecessary and wasteful for all but the most professional of chefs. This is wrong. Higher BTU's doesn't just make food tastes better, it also reduces cooking time. At half power, you can cook an egg in less than a millisecond. And if set to full power, these burners will cook an entire carton of eggs before you're even able to purchase them from the store. Pretty impressive for only nine thousand dollars.

Hello, yes, do you guys sell any laughably expensive ranges with a "commercial-grade" look and feel? I'm sort of going for an "Inner City Denny's" look in my kitchen. The Viking range you say? Perfect. I'll be right over.

The inability to cook two things at once is a problem which has plagued humanity since time immemorial. If one wished to cook chicken strips as well as fries, one would either need to perform complex mental calculations involving oven temperatures, food placement, and cooking time; or purchase two or more extra ovens in which to cook the food. Well no longer. Now you can buy one double oven range for the price of four to eighteen "poor person" cooking ranges. Talk about value!

ABSURDITY RATING
10/10
I'm just going to go ahead and assume that early onset dementia as the sole reason for the continued existence of the Viking brand.