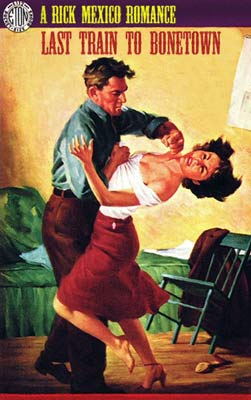 "Hot dog! Eats!" I cried, greedily rubbing my hands together before seizing several handfuls of what I took to be vagina-shaped pastries. As I shoved these into my mouth, Rick strode through the door.

"Good morning beautiful" he grinned, his teeth flashing like some diamonds someone was shining an LED flashlight onto, "I see you're enjoying Koko's novelty baked goods."

"They're simply divine!" I said, gingerly wiping my mouth on the seventeen-thousand dollar chinchillaskin comforter, "Is this Koko?" I asked, gesturing to the Cuban, "I'd like to compliment him on the meal."

Rick shook his head. "No. I'm almost positive this one is called Gomez. Koko isn't even allowed out of the pantry on weekdays. And complimenting her wouldn't do much good in any case; she's a deaf mute, you see."

"How dreadful!" I cried.

"Oh, it's not so bad," Rick purred, dropping to his hands and knees and crawling seductively towards the bed, "She can still make love, after all. You know...like we did last night?"

Heavens to Betsy! Even the mere mention of our sexy lovenight was too much for my pastry-addled brain to handle. The room began to spin. I felt myself falling, and everything went dark...

Upon awakening, I found myself cradled in Rick's arms. We appeared to be climbing a long, winding flight of stairs.

"I was worried we'd lost you there," Rick smirked (but in a hot way), "The moment I mentioned the fact that we made passionate animal love last night, you went unconscious and rolled off the bed. You hit the ground pretty hard. If that crate full of antique pictures of naked children hadn't broken your fall, I'd hate to imagine what would've happened. And before you ask, those photos aren't mine. That's the guest bedroom and I never even go in there."

I didn't say a word. I was too in awe of him to speak. That bristly granite chin...those bristly granite eyes...the fact that he was really rich...it was all too much for a simple smalltown dog-groomer like me to process.

"So right now we're headed up to the helipad," he said, "I've got something to show you. But first...how about a smoke break?"

A smoke break? How dreamy! He paused when we reached the next landing and set me gently on my feet before producing a lighter and a small, hand-rolled cigarette, which he carefully lit and handed over to me. I wasn't a smoker and didn't feel much like starting, but how could I refuse? His face was so symmetrical! I took a couple puffs. The smoke was harsh, but strangely sweet. I began to feel lightheaded almost immediately. I offered the cigarette to Rick, but he shook his head and waved it away.

"No way. I need to be alert! I'm flying the chopper, remember? Gotta keep a clear head."

"Wait..." I sputtered, my vision beginning to swim, "What did you give me? What is this?"

"How should I know?" Rick shrugged, "I found it in Gomez's footlocker. I guess I assumed it was grass or something. Is that a problem? I figured it'd be OK seeing as you're such a strong, adventurous woman who doesn't play by society's patriarchal rules."

I nodded absentmindedly, gazing intently at the creases of my palm. Rick shrugged and took out his phone. He turned away and began speaking in a low murmur. I paced the landing, clenching and unclenching my teeth. Sweat streamed down my face. I began to feel a rushing sensation behind my eyes. A high-pitched buzz filled the air.

After what seemed like hours, Rick hung up the phone and spoke, but I could scarcely understand what he was saying. His voice sounded distant, and it echoed as if I were hearing him through a long, metallic tube.

Great news: Gomez says it was mostly PCP. It should wear off within the next several hours."

"What is this a painting of?" I asked, pointing at a blank spot on the wall.

"What?" Rick looked up, confused.

"Turn that camera back on! I've run out of blood. Goblins. Have you seen my keys?"

"JESUS GOD HOW MANY HEADS CAN A SNAKE HAVE." I shrieked, kicking the air around me.

"Whoa whoa! Be cool, daddy-o, be cool!" Rick placed his meaty man-hands on my shoulders and looked deep into my eyes, "You're upset, I get it. Totally understandable. Nobody likes being dosed with dangerous psychotropic substances against their will. But look: we really, really have to get going here. I mean, I have a whole bestiality/helicopter lovemaking thing planned for us today."

"You should see your face. Hahahahaha!" I cried, rolling on the floor, "You really need...to see...your own face...right now! Whoa!"

"Alright woman," Rick growled, "You want a man who takes control? Well OK: I'm taking control!" He grabbed me by the arm and began dragging me up the stairs like a guy dragging a living ragdoll up some stairs.

Although it felt like my shoulder was about to be torn from its socket, I decided to sit back and enjoy the ride. I was still feeling a little sick from the drugs, and sometimes being drugged by a really rich guy and hauled around like a worthless sack of human sexgarbage is just what the doctor ordered.

After climbing for several more minutes, we reached the helipad. We climbed in the chopper, and were airborne in moments. Everything was going exactly according to plan. Alone and several thousand feet above sea level, I finally had self-made billionaire business mogul Rick Mexico exactly where I wanted him.

Reaching under the seat, I felt around until my hands brushed cold steel. The pistol. Gomez had come through after all. I'd have to buy that Cuban bastard a beer when this was all over. Presuming I was still alive.

"Alright, this is it. Be cool. It's now or never." I muttered, psyching myself up. "You're a rogue government double-agent who doesn't play by the rules. Fear is both literally and figuratively your middle name."

The psych-up worked. It was go-time. I was across the cockpit and pressing the pistol to Rick's temple before he could blink.

"FREEZE SUCKER AND DON'T MOVE AN INCH!" I shouted. Shouting was a tactic they had taught us at Agent Academy. The purpose of it was to instill fear. I continued, "Richard R. Mexico, by the power vested in me by the USDA of These United States, I find you guilty-as-charged for the crime of illegally importing banned meats into the United States with an expired permit! Your sentence: Death."

But Rick was craftier than I had expected. Before I could even react, he slowly unbuckled his belt, pressed the "self-destruct" button, climbed over the seat into the back of the chopper, threw open the cargo door, and jumped out after strapping the one-and-only parachute to his back.

There was little question what I needed to do next. I was a wrongfully-accused child murderer and Rick Mexico was my ticket to freedom. I wouldn't let him escape again. Not on my watch.

I took a deep breath, and jumped.